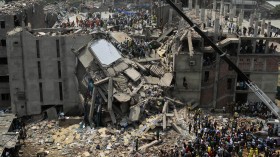 Reports in the news today now put the death toll from a collapsed sweatshop in Dhaka, Bangladesh up to over 600 people. We cannot be complicit in this any longer.

Sweatshops are workplaces where basic worker rights are not respected. In the US, sweatshops at the turn of the 20th century were plentiful and trade unions worked to organize workers and enact important legislation including minimum wages, child labor laws, and health and safety regulations. However, the horrific conditions that have been widely ended in the US continues to be the norm in poor communities around the world. Because they enable cheap production, most of the clothes we wear in the US originate in an overseas sweatshop.

On April 24, four levels of a building filled with garment workers collapsed. The building was inspected and found to be cracking from weight just weeks before the tragedy. Rescue workers have been discovering bodies everyday, predominantly women and children. Mixed in with the rubble were labels for major clothing companies. WalMart, Benneton and Disney have all admitted ties to the factory.

Since the Gloo Factory began printing shirts and other apparel, we have always kept union-made and American-made shirts in stock. Our close alliance with the DouglaPrieta Works collective in Agua Prieta, Mexico has allowed us to offer affordable tote bags, aprons and other garments to our costumers who want to know for certain that their projects are made with fair labor and environmental standards along the whole supply chain.

But this isn’t enough! While the Gloo Factory has always offered these options, more often than not, customers can’t see the enormous cost of choosing a sweatshop-made option. In the coming months, the Gloo Factory will be making information available to customers about the choices they have to stop sweatshop labor. We are committed to sourcing and supporting ethically-made products for each customer’s project. Join us!

You can read a lot more about efforts in the month of May to raise awareness ending sweatshop labor at the International Labor Rights Forum website.